A business case by NS and Castlab. 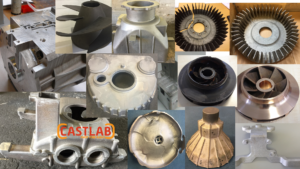 Dutch railway operator NS is working with start-up CastLab to digitise its inventory, allowing for the production of metal parts on demand. By digitising obsolete parts, a mold can be printed and metal items can be reproduced more quickly, reducing the need for large stocks.

CastLab performed an analysis of the spare parts catalogue and an assessment of quality control and security requirements with Dutch Railways (also known as NS, Nederlandse Spoorwegen). This resulted in a selection of 150 parts, which were digitised over the course of 2020. CastLab is developing digital twins (a digital replica) for these components and producing them with digital manufacturing methods, making molds by 3D-printing to cast metal objects.

After the successful completion of the pilot of 150 parts, the Dutch rail operator decided to continue and digitise several hundreds of spare parts for on-demand production from 2020 onwards.

Koen Melis, founder of Castlab: “Once the required 3D drawing of an object is in the digital library, every time there is a repeat order, we can reproduce the item within 10 days”.

At Dutch Railways, traditional production methods for metal spare parts were falling short. Pantograph parts, for instance, have a lead time of 12 months. To ensure they had the necessary quantity at hand, they would place large orders that would saddle them with excess stock. Over time, 60 percent of their entire inventory became non-moving stock. Another challenge they faced was purchasing parts for aging assets. Some equipment uses parts that are over 50 years old – a situation most rail companies are familiar with.

Joris van de Sande, Program Manager 3D Printing – NS Procurement at NS: “The issue of obsolescence was very important, certain objects that weren’t available for delivery anymore. By using new techniques, we can shorten lead times.” The Dutch Railways also wanted to produce the objects closer to home. Next to this, they also have to keep a large stock of objects, due to the way ordering them regularly works. “We have gigantic stocks to keep the trains available, which developed itself over the years.”

Often, when parts are no longer produced by the original supplier, the drawing or design is no longer available. A new mold typically has to be made from scratch. This results in equipment downtime, as the process takes several months. Producing this mold in a traditional foundry is also very expensive. Often, suppliers have high minimum order quantities (MOQ) to make up for costs. In some cases, the supplier’s MOQ would be 100 units when the operator needed a maximum of 1 or 2 per year. The way Castlab can deliver only the required number of parts also contributes largely to sustainability, says Koen Melis of Castlab.

Inventory has traditionally been a large cost driver and a particularly urgent one for Dutch Railways. For some parts, the savings per article amount up to 25,000. “We have around 80.000 items, which also includes non-casted and other materials”, says van de Sande.  “For some of these this process is not possible or necessary, but if we could digitalise 5 or 10 percent of items would already be a large improvement.

A significant benefit being that any components that are reproduced are casted by use of the 3D printed molds according to specifications, and with the required quality approval and (original) certifications. Van de Sande: “All over Europe, 3D-printing is being looked at, but for some cases, such as with metal, this is a really expensive way. What we are doing is 3D-printing not the object, but the printing mold. When you 3D-print an object, it is a different way so the object has to be approved again for use. With casting, you make a 100 percent reproduction of the object, which can be immediately used after a quality check.”

A digital warehouse for the railway sector

CastLab is expanding its offering for other companies in the rail industry by making a digital warehouse of parts available. A digital intake form will allow clients to find out if their spare part can be produced through digital manufacturing. Later this year, CastLab will provide a digital library, where customers can quickly find a part, learn about the best production method (based on the part’s complexity, cost and material), and easily place orders.

The NS is also working on a more active approach. Van de Sande: “We are looking in the systems how we can prevent obsolescence of parts by looking at the entire product life cycle. The idea is to have a digital library, from the beginning.”

In an online interactive session during RailTech Europe, Koen Melis and Joris van de Sande will further talk about this. By showing some examples that have been casted and recreated by digitalising the object and printing a mold, they explain more about the process. Register for the event to attend the session at the Tech Stage, which starts at 16.00 CET today on March 31st.